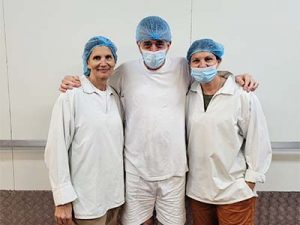 There is an art to making cheese taste so good, and it is this love of the cheesemaking process which underpins Olympus Cheese and our success.

Our Mediterranean cheese and yoghurt is made to time-honoured Cypriot traditions in our family-owned and operated Brisbane factory.

Only the freshest, creamiest milk is used supporting local farmers in the Kenilworth, Lockyer Valley and Scenic Rim areas, and we retain strict quality control from the farm to the table. Every batch of cheese is handcrafted with love and care. lt’s an approach which has seen Olympus Cheese win numerous awards, including the highest accolade the industry can offer.

All cheeses and yoghurts in our range are pure products, containing no preservatives.

Here’s a little bit more about why our cheese is requested again and again.

It’s all in the Milk 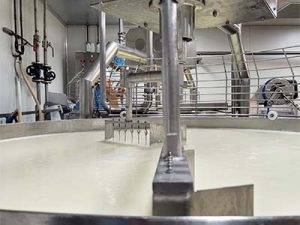 Better quality milk will produce a superior cheese. What the milk source eats flavours and influences the milk and in turn, the flavour and colour of the product. Strict quality control at the farm ensures a better cheese.

The most authentic recipe is to use a combination of sheep and goat milk and an animal rennet. But here in Australia where there are not many goats and sheep, we primarily use cow’s milk. We also use a vegetable rennet. This accommodates vegetarians or people of different religions.

The Craft of Halloumi Cheesemaking

Cyprus is the home of Halloumi, with variations then spreading out to Greece, lraq, Jordan, lsrael, Palestine,
Syria and Turkey.

The most important factors that change the flavour of Halloumi are:

Here at Olympus Cheese we use cow’s milk – which produces a delicious product which is slightly yellow in colour. lt
can vary in taste seasonally due to the feed that the cows are eating. The flavour has sweet grassy notes. We also mint
our cheese in the middle which adds an additional layer of flavour. Olympus also produce an un-minted Buffalo Milk
Halloumi which is very white in colour and has leathery, earthy undertones.

Unpasteurised cow’s milk is added to a large pot and heated to approximately 32 degrees Celsius. Then a rennet is
added which causes the milk to separate into curds and whey. Next the curds are pressed into small moulds and left to
cool. Once cooled, the curds are simmered in the whey until they float. The blocks are then removed, minted and
allowed to cool, before being brined in a salty solution.

Ricotta is a fresh cheese with no rind and a high moisture content. lt is mild in flavour with a fresh taste.

Ricotta is ready to eat within hours of being made and is so young that it has barely had time to develop any more than
a whisper of the milk’s potential flavour. So the flavour is described as milky or sweet.

Ricotta has the lowest fat content and highest protein content of all the cheese categories but its high moisture content
means that it also has a very short shelf life.

The ricotta process is simple, relying on great ingredients and speed of processing to retain freshness and quality.

Whole milk is warmed to 90 Degrees Celsius, then coagulated and salt is added. This allows the milk to separate into
curds and whey. Curds are then strained and after draining for a short period of time, the ricotta is ready.

Fetta is traditionally made from goats or ewe’s milk. Here in Australia, Fetta is made mainly from cow’s milk. Olympus
Fetta has a salt tang on the finish but also a depth of flavour. We also produce Buffalo Milk Fetta and the flavour is
creamier and more intense.

The process of making Fetta is slow and gentle. Whole milk is heated slowly to 40 degrees Celsius. A starter culture is then gently stirred in.

The mixture is left at a constant temperature for a time, before calcium chloride and vegetarian rennet are added. This
begins to set the mixture. Once set, curds are cut with a knife. This process separates out the whey.

The mixture is then further set by draining, before cutting into blocks and brining. Lastly, the blocks are drained,
packaged and refrigerated.