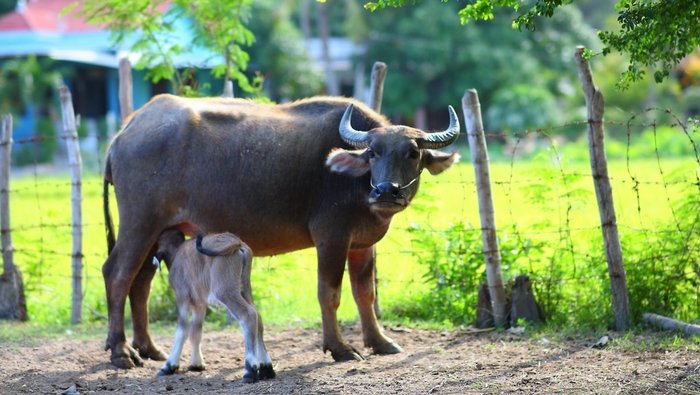 About the buffalo industry

The buffalo cuts a pretty tough looking profile compared to the cow…but we think they’re a pretty handsome creature. Whilst they’re not native to Australian soil, many people don’t realise, that buffalo have been present in Australia since the 1820’s. They got a bit of a bad rap in the northern parts of Australia, causing a mess up there in feral populations, but were largely under control by the 1980’s.

Since then, buffalo dairies have been set up in most states, largely in Victoria as well as New Zealand and in our own Queensland, due to a high and increasing demand for buffalo products.

But buffalo milk doesn’t come easy. The volume of milk produced from buffalos is much less than would yield from a traditional dairy cow, and production costs are also higher. In Queensland, the weather can also minimise supply, so sometimes buffalo milk can be scarce. But to date, there’s one to two million litres of buffalo milk produced in Australia annually.

The popularity of buffalo products is growing exponentially, and the industry is predicted to grow even further.

“The popularity of buffalo cheese has not had its day yet,” Australian Buffalo Industry Council president Mitch Humphries told Farm Online National earlier this year.

Why? According to Healthyway.com, buffalo milk has about 11%% more protein than cow’s milk, is extremely rich in calcium and is also high in minerals like potassium, magnesium and phosphorous. It has a higher fat content, which is why it is ideal for making cheese.

Where do you source your buffalo milk?

We source our buffalo milk from a buffalo dairy in the Maleny region. This aligns with our philosophy of providing the freshest ingredients, produced from grass fed buffalo.

There’s a beautiful article written by Petra Frieser for Regional Foodie Magazine all about the Thompsons of Witta Farm.

What kind of cheese can be made with buffalo milk?

The great thing about buffalo fetta is how white, mild and creamy it is. The Australian-style buffalo fetta also has less salt than many imported styles. The texture of buffalo fetta is quite firm and doesn’t crumble as much as other varieties. Because of its mildness, it is tasty cubed in salads or used as part of a cheese platter for entertaining.  Find out more.

Buffalo Halloumi has an earthy flavour and is not as sweet and herbaceous as cow’s milk halloumi. It is great grilled with vegetables on the barbeque, pan fried and added to salads, or served as part of a hearty breakfast. Buffalo milk halloumi still retains the firm texture on the outside, with the famous squeak when you bite it. Find out more about this exciting dairy product.